We announce with great pleasure and excitement that the quantum computer simulator libraries vm6502q/qrack and vm6502q/pyqrack have officially joined the Unitary Fund GitHub organization of open source quantum computing repositories! Get started with Qrack from the docs here.

Given Qrack’s support for Wasm, we’ve joked at the Unitary Fund that Qrack can theoretically run on literal internet-of-things enabled smart refrigerators, but open an issue ticket on the repository if we’re blowing smoke and you still need developer support for your smart fridge, seriously!

A standard example of Qrack (and PyQrack) performance is the quantum Fourier transform (QFT). Comparative results from benchmarking are in the graph below and are available on Metriq (as single-valued exponential trendline slope comparisons). Historically, Qrack measures this benchmark with an initialization by random 3-parameter unitary single qubit gates across the register width for a fair comparison, because Qrack QFT performance on computational basis states is classically efficient because of the underlying Schmidt decomposition. That wouldn’t be representative of general demands for cases of the QFT. While Qrack would perform worse for a random fully entangled case, our choice of randomly initialized separable qubits generally become fully entangled by the end of the circuit, paying a representative performance penalty for potentially composing every initially separable qubit. Hence this has historically been deemed a fair benchmark by the Qrack team.

PyQrack has a commanding performance lead on this benchmark compared to other popular quantum computer simulators like Qiskit Aer (GPU) and QCGPU, where these three candidates are GPU-based simulators. Qiskit Aer (CPU) and Cirq (CPU) have been included on the chart, run on the same stock gaming laptop as the three GPU simulators, but remember that these software benchmarks are most fairly compared on identical hardware, whereas it isn’t possible for a CPU model and a GPU model to be the exact same hardware instance, obviously. However, PyQrack’s hybrid CPU/GPU methods utilize CPU simulation at the low qubit width end of the trend, which should be a fair comparison against CPU simulators until the user-selectable GPU switching threshold, which is 9 qubits in this case.

Qrack is a collection of stacking and interchangeable optimization layers, which include OpenCL-based, scalable multi-device GPU, CPU, and GPU/CPU hybrid state vector simulation at base, hybrid stabilizer simulation with full and transparent recourse to state vector representation as fallback, an auxiliary quantum binary decision tree layer, and Schmidt decomposition techniques layered over stabilizer and state vector simulation for proactively and reactively identifying separable cuts in qubit subsystem representations to reduce memory footprint and improve execution speed. Floating point precision options available from source build include half, float, and double, with even limited support for quad math. By design, most users don’t need to worry about complicated custom configuration of the layers and settings at all; just instantiate a default C++11 QInterface or Python QrackSimulator class and go! The highly-optimized default layer stack will automatically leverage hybrid stabilizer simulation for a Clifford circuit or preamble, for example. 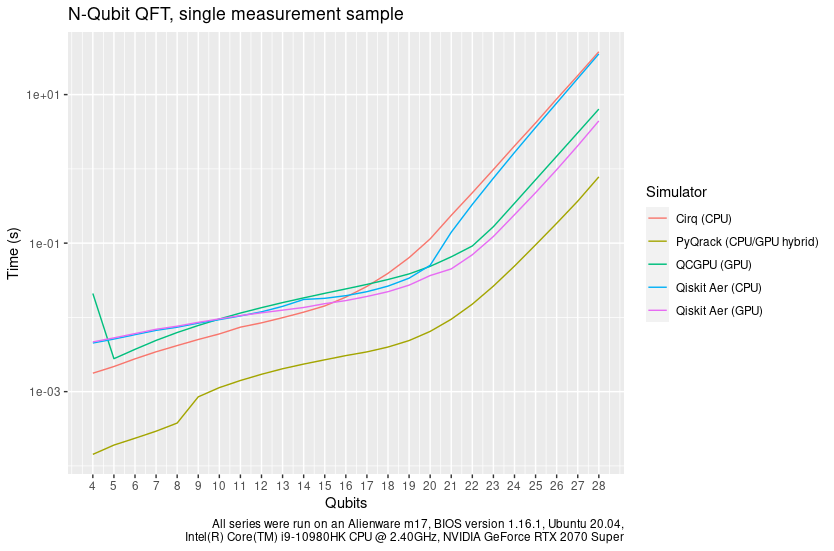 Check out the repositories on the Unitary Fund GitHub organization, star and share, and get Qrackin’! You rock!